After five years since the last accordionists’ workshop, an opportunity occurred to renew the tradition, to meet and enjoy ourselves as well as to learn something new…

Although almost everyone had written something about themselves in the entry questionnaire, sometimes even adding a few words about „how had it all come to pass“, meeting in person is above all writing. Three generations of present-day accordionists (and maybe some accordionists-to-be) met under the attentive, but kind supervision of Jiřka Černíková and her camera. And as nobody wanted to starve, the kitchen was conducted by Jarda Zadražil. This year’s innovation was a „hamper“ of food we hadn’t managed to eat, which everyone got when leaving. 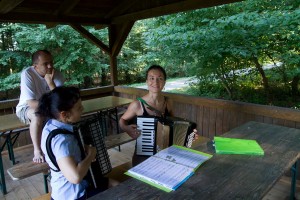 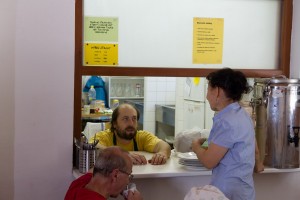 The musical delicatessen were served to us, the interested and always-ready-to play accordionists, by four instructors: 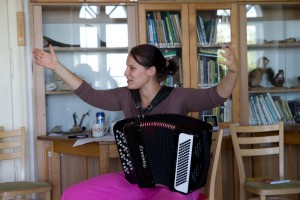 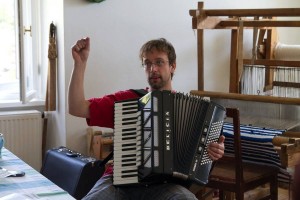 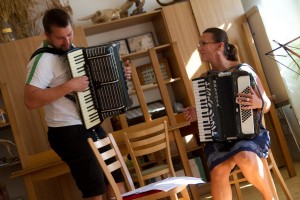 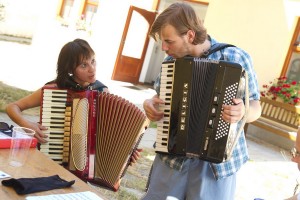 In the first workshops on Saturday, we learned and practiced for a „grand concerto“, which was planned for Sunday. The repertoire had been chosen so that everyone managed to play it, and at the same time to learn something new. Not only accordions were present, however; musicians playing guitar and cajon, who weren’t afraid of all those squeezebox players, accompanied us as well. Even some diatonic accordions could be seen, which – despite their relatively small size – were perhaps the loudest ones. The concert was crowned by Hava Nagila, and what an experience, hearing twenty accordions sueezing together!

If you would think that with the Sunday concert it was all over, you’d be mistaken. After the dinner, it got completely dark, because the electricity supply was stopped by a storm. In the murky atmosphere, another drama followed: all participants met in the common room and lots were drawn. A person whose name was on the lot had to play others something from his or her repertoire (or at least try). Even dancers got a chance during a polka and „ladies’ privilege“. When the storm ended at last, sunlight came and with it a beautiful rainbow.

We returned to the main room after that, and with the guidance of Klára, we got down to playing a little tango of hers – Tanguito –, which she had composed for the less advanced musicians as well. No dancers were present, but it didn’t prevent us form expressing all those emotions that tango rouses into our play. 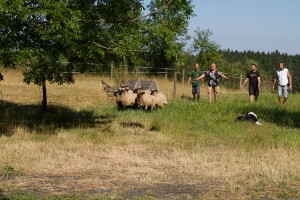 All the excitement wasn’t over, however; when we were asked to help with shooing a flock of escapist rams back into their fence, most of us woke to new activity. The attempt to escape ended without success – for the rams – and maybe even them know now that when you are surrounded by a pack of accordionists, it’s a bad idea to rebel.
And I mustn’t forget another member of our company, a frolic kitten with unceasing love for play, all the time testing our attention. 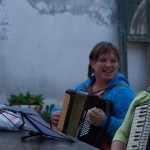 When the summer workshop ended on Tuesday, few of us wanted to go home. Let’s hope we meet at Chaloupky next year!

Written by Vendy Kropáčková, a participant of the workshop
Published on 15/9/2013