It is a mystery to me, whether some people with inner overpressure (and musical talent) necessarily arrive over time to playing the devilish mutation of the accordion – the diatonic accordion – or whether their frantic lifestyle is the consequence of playing this instrument. But honestly, what does the choice of a musical instrument tell about ourselves? 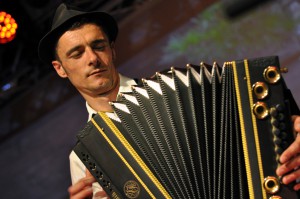 Herbert Pixner and his diatonic button accordion can’t deny their place of origin. The sunlit Alpine chalets and sudden and wild storms can be described as an encounter of two different worlds, a peaceful idyll with the forte fortissimo of the mad elements. Herbert has both of them on his repertoire.
Herbert Pixner was born in 1975 in Meran in Southern Tyrol and grew up together with five siblings on a mountain farm. He began with clarinet and percussions in a musical school when he was eleven, then he self-taught himself on the diatonic button accordion, and later he broadened his instrumental repertoire with other instruments (flugelhorn and bombardon), but at the same time he managed to pass exams and become a carpenter. Even though he didn’t finish his studies at the Carinthian Provincial Conservatory, he worked as a teacher of Steirische Harmonika in a musical school for a time – and as a chalet farmer in the Swiss and Tyrol Alps during the summer months. Today, he lives in Innsbruck.

In 2000, Herbert Pixner spent three months in the town of Vail in Colorado, where he made his living as a bar musician. He has played solo as well as in many groups since his return and is the co-author of music to a number of musicals. He also takes part in the organisation of Folk Music Festival in Styria, devotes himself fully to the Herbert Pixner Projekt group since 2007, and organises an endless marathon of accordionists’ workshops in his remaining free time, mostly in German-speaking countries. His newest enterprise is the Pixner’s BACKstage TV programme.

P.S. Dalibor Halouzka wrote us after the article had been published that he has one piece by Herbert Pixner written down… so here you are: Augenstern in devillish Ab major.