Who wouldn’t have heard (of) it? One of the best known Jewish songs. The Irish pub has Seven Drunken Nights, country lovers have their Ring of Fire, Mozart has Eine kleine Nachtmusik…  Our violinist Jitka calls them „index songs“, and she might have meant it rather pejoratively at the beginning, but the meaning of this term has shifted in our band and now we enjoy playing them form time to time. 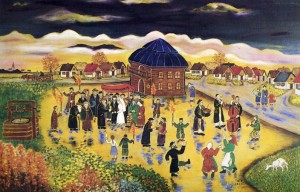 Need a proof that Hava nagila really works? One day, it was in June, we had some spare time in Vienna, so we pushed through the tourist crowd in the centre with our instruments and started playing on the street. Busking it’s calletd these days. Nothing much, until we played Hava nagila. I’d like to note that you have to keep the rhythm quick, if you want it to really work: make people stop, listen, clap their hands, give you an euro or two. A pity we had to go, otherwise we would have kept playing Hava Nagila there forever.

Or another time in Františkovy lázně: after the concert comes a lady, a nice and old lady, thanking us very much that we’d played her the favourite song of hers – guess which one. Yet in such circumstances, you have to play it slowly and in a heart-felt manner to make it work.

Slowly or quickly, in a band or choir, instrumentally, traditionally or like punk… Nevertheless, our arrangement is the best, that’s obvious. Even the participants of the accordionists’ workshop liked it – Hava nagila played by twenty accordions was really an Experience (yet resembling rather the punk than the traditional versions).

Article, scores and recordings by Jindra Kelíšek
Published on 3/10/2013