The noble parallel of life and music is impossible to overlook: in life,  after each long period of undisturbed peace, one craves for a frantic change in the burdensome mundanity; likewise in music, during a once-again dully brilliant performance of klezmer philharmonics, a listener often feels an itch to jump up, spill the rest of his drink on the backs of those standing around and release the dangerous overpressure through convulsive movements.

Don’t say this hasn’t ever happened to you! Or – admit that listening to Honey in the Hair, this is exactly what you’d like to do. Damn the dull brilliance. This is life, this is punk! 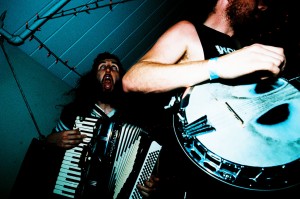 Blackbird Raum
is a folk-anarcho-punk group established in 2004 in Santa Cruz. At the beginning, it was just a random formation around the banjoist C.P.N. and accordionist Zack.

The early days were hard – they earned their first dollar from a man who’d paid them just to go away. The classic pieces, like Honey in the Hair and Coal, were created at this time. They recorded a demo, but shortly afterwards the group broke up. C.P.N. left Santa Cruz for a year and renewed the group after his return. They were joined by K.C. (washboard), David (washtub bass) and Mars (musical saw and mandolin). They quickly composed new material and released their first album “Purse-Seine” (called after a poem by Robinson Jeffers). However, the group was quite dissatisfied with their first album and soon came up with a new album called “Swidden”. Members and the musical style of the group underwent many changes in the following years.

As regards the themes of their songs, they include e.g. destruction of the environment by the environment, mental diseases or class war. The members of the group sometimes call themselves “eco-anarchists”.

SCORES – the overture with the left hand – PDF, MSCZ

I fill my mouth up with air, honey in the hair
I fill my life up with time, asleep in the wine, whiskey and wine
Who makes the wind blow, I don’t care, my eyes roll back in my head
I’m just walking in circles I see the lines in chalk on the ground
One day this will all come down
Someday this will all come crashing right down
So go on with your life we will bring you down