There’s no doubt that Johann Sebastian Bach would have composed mainly for the accordion. But unluckily, he couldn’t, because he was born in a time when the accordion had not yet been invented, and as far as keyboards are concerned, he had to manage with the piano, organ and cembalo. However, not everything is lost: Jana Bezpalcová has prepared one of Bach’s minuets for us, so the baroque music can glimmer in a new light. 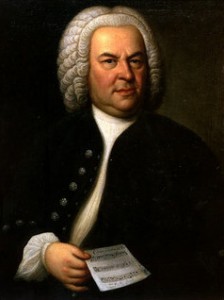 This minuet in g minor comes from the Notebook for Anna Magdalena Bach, which Johann Sebastian Bach composed and compiled in 1725 for his beloved wife, a singer, Anna Magdalena (1701–1760). The notebook contains about forty piano compositions, including several baroque dances. The minuet in g minor belongs to the best known of them and is a popular study composition for players of various instruments all around the world.

To those interested, I present here this version, adapted for the piano accordion.
I recommend that you pay attention to proper articulation while playing, i.e. strictly respect the beginnings and the ends of legato slurs and distinguish carefully between tenuto and staccato. The same is true for the left hand, too – don’t slur anything that isn’t tied by legato.

It’s necessary to attend to the melodic ornaments as well; the right way to play them is explained at the end of the sheet. The squiggle is called pralltriller, the wavy line with a short vertical line through it represents mordent. The pralltrillers were played in baroque times always from above, which means that they begin with the upper note, then you go to the main note, and then back.

To play this minuet, use one of the registers without tremolo, i.e. without the trembling sound typical of the accordion – it’s good for folk songs, but doesn’s suit a baroque composition very well.