A true Accordionist wouldn’t always want to play all those rather worn-out songs, would they? To grant the wishes of those harder-to-please, we have something special for you today, real „icing on  the cake“.

Let’s pass the word to the author himself now:

The recording of The Jazz Invention comes from May 2008. It was recorded at a concert, and together with me features a second accordionist Rosťa Beneš, another instructor from the Chaloupky summer workshop. You can listen to the other compositions from this concert at bandzone.cz/raska.
There are two versions of the scores, the first one being just the theme together with basses, with which the whole song begins. The second version is a structure of the whole. In the empty bars, where you’re given only the tabs, you’re supposed to improvise – like on the recording available (together with a source code for the scores in Musescore).

I recommend to take e.g. four bars while training and repeat them over and ovr again, coming up with new themes, motives and melodies, so that you have something to draw from when you’re improvising. Sometimes it’s great to play what comes to your mind, but if nothing does, it’s fine to have some backup. Finally, my percussionist’s self advises you: train everything with a metronome :-)! 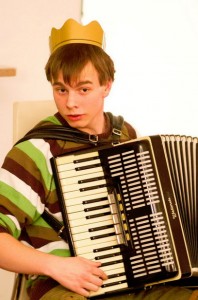 One of the instructors at our accordionists’s workshops. He studied at the Brno Music Conservatory, playing the accordion and percussions, and currently studies at the Jaroslav Ježek Conservatory in Prague – piano and the art of compostion. Thanks to the broad range of his musical interests, he’s able to look at music from many perspectives, because each instrument has its own characteristics, which can be transfarred to other instruments as well. Nowadays, he focuses primarily on his own compositions and prepares for the recording of his own album.

Article, scores and recording by Stanislav Samuel Raška
Published on 30/9/2013