A search after one’s favourite song can turn into an investigation difficult enough even for Sherlock Holmes. This time, it’s gonna be thrilling: accordion, Russia, legionaries… Do you even know what „raskosha“ is? 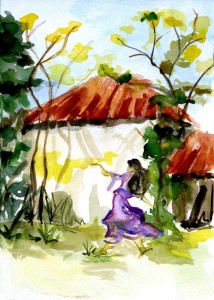 Our accordion school is asked for scores of someone’s favourite song each and every week. Things sometimes get rather complicated, however: once, the writing of scores has unexpectedly turned into a historical research. The task seemed simple at first – scores for „the Russian song Dolina‘“. Why those quotation marks? You’ll understand after having read this article.

Already as we were browsing the web, it rather surprised us that the song Dolina has very few videos on Youtube. Such a well known song! In the end, we chose this version by a Czech accordionist.

We kept wondering why the Russian original was nowhere to be found. We asked our friends from Russia, and after having listened to the abovementioned version of the song, they asked us what that Czech word „raskosha“ (роскоша) meant. What, Czech word? Why, that’s a Russian song! It soon became clear that neither Czechs, nor Russians know this word. What on earth are we singing about, then?

Only at this moment we understood that the song, as it is played in the video, simply doesn’t have a Russian original. It seemed certain that to find out how and where this song originated would require some joining of forces and search eastward of our borders, perhaps even further than we had originally expected.

Step by step, we managed to gain more information and clues and shed some light on the mysterious origins of this song. Let’s have a look:

He smoked machorka, a good tobacco, he loved a girl as a Don Cossack – These words are typical of Russian town pub songs from the end of the 19th to the beginning of the 20th century. They usually tell the story of the „merry life“ of the main character.

Oh my dear „raskosha“ – Our friends from a Belarusian folklore ensemble led us onto the trail of the non-Russian and non-Czech word, which the lyrics didn’t make sense without. They told us that the word „raskosha“ came from a Belarusian-Polish dialect used up to this day in Western Belarus and that it meant a pub in a small town by the road or in a street.

Lowlands, lowlands – There is another Russian song with this name, sweeping and broody, that has either rhythmically or thematically nothing in common with our song and continues with entirely different words Раздолье широкое (wide space).

Where is the street, where is the house? and the following stanzas – The origin of these lines and melody is the clearest: they are taken from the film theme song Крутится, вертится шар голубой (Spinning, turning blue ball). That song is, by contrast, very well known in Russia. You can watch a version where the Russian part continues in Yiddish and finally in a lively American arrangement.

Our musical investigation has led us to a definite conclusion: the song Dolina, regarded in the Czech Republic as typically Russian, is in fact a compilation of several different songs. Yet how did this happen?

Most probably, it was created and arranged in this form by some Czech who had had the opportunity to listen to various Russian as well as Cossack songs. Then he just combined their fragments into a new one, not bad at all.

Where and when this came to pass, remains – and probably will remain – a mystery. We came up with several possible explanations:

Do you have any other idea? Or do you perhaps know of any other clue to solve this puzzle? Don’t hesitate and write us!

What to say in conclusion? At the end of our investigation, we understood one thing: a song is a living organism that – as far as it fulfils some necessary criteria, such as easy-to-remember melody or „catchy“ lyrics – can live a life of its own and become widely popular. This means the most beautiful fate for any song: to become immortal. What else could a song wish for?