How to express it? Thinking about edges, you feel that they’re sharp, that they mean borders, where the smallest step can change everything. And in your head, it all begins: the idea is first, it is what leads us – leads us to our inner balance that enables us stand even on a thin rope.

English translation:
A butterfly sat down
On the edge of my palm
How frail it is
To caress or kill

The recording of the fourth album AR 2 3 of theZDARR band (Most, Czech Republic) also began with thinking. We didn’t have enough songs, however, and some of the new ones were created under pressure and in uncommon situations. Acting under pressure doesn’t always lead to the best choices… and I felt that when I was writing this song, the lyrics of which flew from my head to my hand and on paper almost with no effort

The album is really diverse. The music was recorded live, all instruments together, with vocals recorded afterwards. Listen for yourselves. But nooo! I shouldn’t compete… 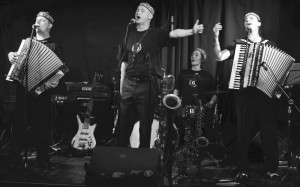 The ZDARR band was established in 2000 and its rather mysterious name consists of initials of its members’ first names –  ZDeněk Souček, ARnošt Anderle and Roman Pašek.

The band’s rhythm was livened up in 2001 with Pavel Hendrych, the tuba player Zdeněk Říha accompanied ZDARR for two years in 2009–2011, and at the end of 2012, the band was joined by the jazz percussionist Filip Ernst.

All songs and compositions are original and mostly written by Zdeněk Souček, sometimes in cooperation with other band members and their friends. ZDARR also cooperates with Pavel Brycz, a writer, poet and songwriter.
The band calls its distinctive style „open acoustic fusion“; it could also be labelled „modern chanson“ and fits into the „world music“ or „alternative“ category as well.

You can hear ZDARR at concerts and festivals across the Czech Republic and in neighbouring countries.