This is to let you know that at the summer accordionists’ workshop at the beginning of August 2014, we enjoyed a sweet time, no matter what kind of jam you prefer!

On Friday, 1st Aug., we gathered at our traditional and best-liked “summer school” Chaloupky. Everybody arrived on time, welcomed by a sunny and just-perfectly-warm weather, and after a short relax (and a glass of beer in a few cases), the program begun. While playing a game in the orchard (which involved a lot of running and chasing and fruit-picking), we got to know all the new faces and also collected necessary ingredients for our “accordion jam”. 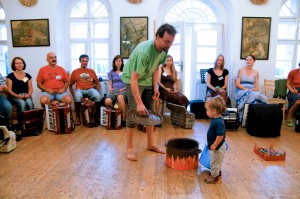 We moved to the common room afterwards, put all the fruit into a pot and flavoured the mix with our ideas and wishes for the upcoming weekend, telling others something about ourselves, as well as what we would like to experience and learn, and the instructors Jindra, Sam, Žaneta and Michal played us short samples of songs they planned to work with the following day.

The more formal introductory part was then followed by a great evening with a lot of fun and some jamming, too, long into the night.

After a plentiful Saturday breakfast we gathered again in the commong room and started trying and practising together two compositions called Sunside and La Valse á Papa, which went quite swimmingly :-)
We were then split up into four “consultation groups“, where each of us played their instructor as well as others a piece of their own choice, asked for advice and was praised. As a reward we got a delicious lunch by Jára Zadražil. This left us with no other choice than lie down for a while, relax and digest all the morning’s experiences. 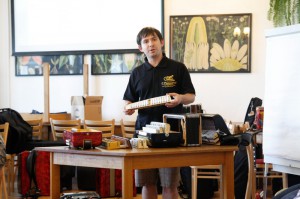 Accordion is quite a simple instrument

The “noon break” was again followed by workshops with the instructors, but this time we could choose where to go according to our musical taste. Our group, led by Žaneta, was engaged with klezmer till the very last second – no time to lose!

After another short pause we continued together in the common room: Sam shared with us some tips for writing down scores of our favourite songs using recordings, Dalibor showed us the mysterious and complicated entrails of an accordion (it’s not recommened to try at home on your own, though) and told us more about how it works, and Michal introduced to us the Italian family company Pigini, producers of “premier-league” instruments.
We barely managed to stretch ourselves according to the example of Martin, and we were called to dinner by Jára, so that pentatonic improvisation led by Žaneta was left for later in the evening. Apart from that, there was also some more body exercise, and of course a lot of singing and dancing and playing, outdoors as well as indoors, on the floor and on tables… 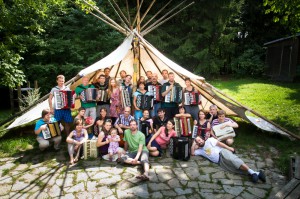 Getting up after such a night was nothing too sweet, but we didn’t want to sleep through all day (knowing that we’d have to wait half a year for the next workshop), and having refreshed ourselves by coffee and other pick-me-ups, we again split into four groups and practised for the traditional and grandiose Sunday concert. We looked into the pot then, took it off the stove and saw that our weekend “accrodion jam” was really tasty and sweet, mhmm…!

What else? See you in January and till then…