It doesn’t happen that often to me, just once a year perhaps. It occurs by chance, without looking for it, suddenly it comes to me – a piece of music I want to listen to over and over again. I just can’t get enough… 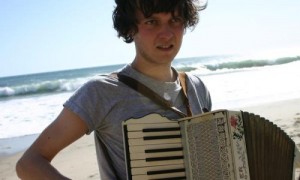 And this is what happened to me with Zach Codon and his group Beirut. I think I was amazed for the first time by the video to the song Nantes, some five years ago: a noisy street, an accordionist walking, beating on dustbins, Zach’s sweeping gestures and his interesting and strange singing.

A cool dude, to be sure. And a really good one – he gave up school, travelled through the Balkans and began to play with his group around the world!

I don’t dare to transcribe Nantes into scores yet, since I’m emotionally attached to it. Therefore, we’ll have a look at A Sunday Smile. Nothing difficult, one keeps playing four chords over and over again for three and a half minutes. Is it possible to make a whole song with such stuff? Of course it is, and how nice, watch and listen:

Or would you prefer a studio recording from The Flying Club Cup album?