The chilly winter wind kept sweeping through the valley like draught in a deserted house. It whizzed, pinched the travellers’ cheeks and there was no place to hide from it, however hard the three adventurers might try, and even though they wore heavy woolen cloaks. When the road turned at last and began to descend in a glen towards the blinking lights of a village, they prompted their ponies to an even greater hurry. A while later, they dismounted in front of a small but cosy-looking inn and looked at each other.

Do you prefer listening before reading? Play the “illustrated audio version” on YouTube with awesome music by TramTram! You can find attached music sheet on the bottom of the article.

“We’re here then,” declared the tallest one ominously, and the other two responded with silent nods. 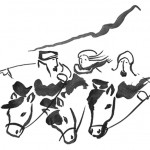 One could almost count the locals on the fingers of one hand, so it was no wonder that the travellers aroused attention immediately. Neither the innkeeper wanted to be left aside, and after setting three proper pints in front of the guests, he sat down next to them and started examining them expectantly. When the continuous silence felt unbearable, he couldn’t contain himself any longer and – for the whole room to hear – asked: “Well, what is it that brings you hither? All trails end here.” 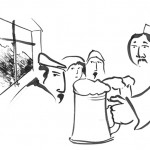 The foreigners first looked at each other again, and then they turned their eyes inadvertently towards the window, behind which it was possible to guess, rather than actually see, the rising slope of a tall cliff. 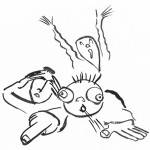 Yet the innkeeper noticed their glances and his face turned pale. “Don’t say you go to…” They didn’t contradict him. It wasn’t worth explaining. Still, as one could expect, the few local patrons began to shouting down each other with terrifying stories. “No one has ever returned from there,” sighed one disbelievingly. “There’s a monster living up there!” pointed another somewhere in the distance, rolling his eyes as if he himself wanted to scare them. “It puffs and bellows! And the ear-splitting squeals!” added a third man eagerly. “And it‘ll snap you with its teeth!” concluded the innkeeper, always determined to have the last word. But it was no use. No one could dissuade these three stubborn fellows. 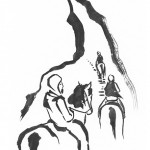 They set out after a proper breakfast. The wind had ceased and every small step of the ponies echoed through the twigs and leaves with loud snaps. As they climbed higher and higher, the woods became more and more silent, the birds ceased to sing and all sounds were gradually drowned in a monotonous hum, rising in deep and booming crescendo. After a short while, they saw where it was coming from: an arching mouth of a dark cave, gaping from the grey rock.

Suddenly, one of their ponies snorted with anxiety and the strange sound hushed. They were stricken dumb, and for a moment they doubted their courage. 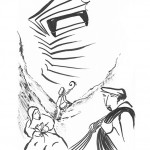 A faint rustling sound, followed by a rattle of stones and scraping of something large against the wall of the rock… and lo! There stands the gigantic, sinister, and yet magnificent Draccordion, staring on them fixedly. But the first bold fellow has already mastered his courage and pulls two intricately shaped clefs out of his ragged sack.

Draccordion prances on its hinder part and bellows disharmonically with its one-hundred-and-twenty basses.

The second fellow takes a bundle of five-stranded rope from a pony’s back a starts uncoiling it. Draccordion stamps and howls with a wailing tremolo. Finally, the third fellow flings down a patchy bag from his back and shakes out a jumble of quavers and crotchets, legatos and staccatos, and a handful of ligatures. Draccordion rolls his eyes and clicks his shiny black-and white teeth. 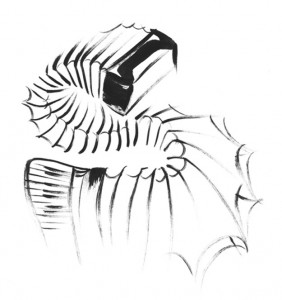 Yet it can’t help itself, because apart from all its horribleness, Draccordion is also horribly curious. It stretches its folded body slowly, crawling closer, out of the cave, and it doesn’t appear as bad now. This encourages the adventurers to come near him. One of them begins singing a merry melody, and it seems that Draccordion likes it; it lies down and puffs contently, takes a sniff and champs at a few rests, and after a while, it lets the fellows to tie a stave, even with the clefs, around its neck. They can just pat it kindly then, and Draccordion follows the ponies willingly down the slope.

If you want to cope with a Draccordion, you need to know the tricks!