The song called Pozoruji (Watching) was one of my first compositions for the accordion, which I got as a present for my 18th birthday. As I had already mastered piano, I “just” had to add bass buttons and bellows. Phew. And the watching song was born. 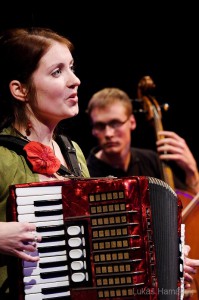 I have always liked French and always disliked revealing much of myself in songs, which led me to write my first composing attempts in a jumble of various languages, so that the listener would understand as little of them as possible. In fact, neither I myself did understand the meaning of these lyrics at first, but as the time passes, I have witnessed that the full understanding comes with a few years’ delay. Sometimes I feel that all the music already exists somewhere in the interspace and you just record it, putting it on paper.

For giving you access to these scores, however, someone else deserves credit. I’m not very much into the technical side of music and all those programmes, but Petra is. We met each other in a car on the road to the winter accordionists’ workshop 2014. I told my companions about my new experience with teaching people sing, which I’d begun with recently. On our way back, when I woke up in Prague, Petra asked me if I would try a lesson with her. A few lessons later, she wanted to learn one of my songs. An the next time, just by-the-by, she produced the scores, saying she enjoys the transcribing! I was glad, because I could never put them down so nicely. It’s great when programmers and other such tech-types go in for music. That’s what I enjoy – everybody finding themselves in what they like! (Anyway, Petra’s singing gets better and better :-))

you feel the sun…