Keys, papers, ten minutes a day and the Draccordion: or, how we enjoyed the winter accordionists’ workshop, gained a lot of experience and learned many interesting things.

After half a year, restless and eager – and some of us also a tiny bit nervous, too – we gathered at Chaloupky and met again many wel-known as well as some new faces, this time at a supposedly „winter“ workshop (rather a spring one, though).

The very first evening of Feb. 21 brought about a little miracle: almost everyone arrived according to the plan and on time, so that after a declicious dinner – traditionally the work of Jára Zadražil – we could begin. At the gathering in the common hall we introduced ourselves to others with the help of our keys and were introduced to this year’s instructors: Jindra Kelíšek, Sam Raška, David Lomič and Tomáš Görtler.

Tomáš Görtler – You really can’t play this monster while standing…

David Lomič – Can you manage to follow my fingers?

Jirka Královec – Let’s take a snap from the drone

Saturday began with us practising together a composition with a sweet Italian name “Amore Mio…” All went perfectly well, of course, which led us to planning the creation of a deafeningly great accordionists’ orchestra. For the time being, however, we contended ourselves with the planned Sunday concert and split up into workshops with the individual instructors, where each of us presented others some of their masterpieces and let themselves be praised for it (more or less). We saw again how many tastes we accordionists have, which is just all right.

The lunch made us think about cancelling the afternoon programme, as we were all too stuffed to do anything else than fall into our beds. However, in the end, we did manage to overcome our sloth, and followed again our instructors, who’d prepared for us some specialties to practise for the Sunday concert, everyone being decided to show off.

In order to make some documentation for the following generations (and to get hungry as well), Jirka took his drone and his camera and we went into the wild to take some really stylish photos. 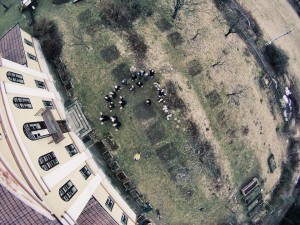 We gathered again in the common hall after the walk, and a animated discussion followed, as regards the obstacles of an accordionist’s life, and how to overcome them. It can be summarised as follows:

When you’re practising, always choose a short stretch of the scores and repeat it over and over and… until you can play it properly – see Sam’s recipe for a perfectly played composition.

Question: What shall I do if my playing annoys the neighbours?
Answer: Don’t give up, they’ll eventually get used to it.

It doesn’t really matter whether you play well or awfully, ten minutes a day is enough to make a virtuoso of you before the next workshop.

If you want to play flashato (for those not familiar with music terminology – very, very fast pace), you must warm-up you hands properly. The real problem arises when you can’t manage even the warm-up without Sam’s sophisticated methodology.

A song gains its expression by working with the bellows: don’t pull them as if you were in a forge, an accordion has to be taught how to „breathe“.

After that, Jindra showed us how to use the accompanying chords played with the right hand (of course, you must know the chords in the first place), and Sam presented us how to follow the bass line with the left.

Everyone was yearning for some reward and relax after such a demanding programme. The directresses Janka, Háta, Eliška and Adéla had put together a „lightshow“ with an overhead projector, called The Taming of the Draccordion, and after having watched it in our little „cinema“ in the attic, we played music, sang and enjoyed dainties made by Jára (some of us in brand new accordionists’ T-shirts). The party reached its peak when Tomáš brought a pair of electric accordions; the attic sonn boomed with the greatest hits, the floor shaking.

The Saturday night life didn’t last too long this time, but at least we didn’t have any problem waking up (at least most of us) and practising our compositions. The grand final megaconcert was really something to remember: hearing us play, all fans just went crazy, which makes me believe that the plans for a world tour are nothing less than entirely realistic – well, judge for yourself:

New candidates still accepted – what say you, will you join us the next time? The summer workhop is scheduled from 1st to 3rd August 2014, again at Chaloupky (where else)!