A report by an accordionist-beginner and a first-time participant of the traditional and unique accordionists’ winter workshop at Chaloupky.

We had noted the weekend of 6-8 February 2015 in our diaries many months before, so the arrival of participants went quite smoothly. As I was rather nervous, I gladly used the possibility of car pool with another participant, made easy by an online table. I found out that Honza was almost my neighbour. However, the first problem arose when we tried to pack our luggage in the car. Two chaps, and so many belongings? Not at all! Just a small bag and a large accordion each, but a huge sack of accordionist’s fears… You, more experienced players, probably don’t know them, but what about us, beginners?

One keeps thinking – I can’t play anything, I’ll disgrace myself, it will be embarrassing, I will play out of tune, they will laugh at me, I will sweat, what if I hold the accordions upside down, I will forget even the little I know, they will point their fingers at me…

We managed to cram them all inside at last, and set out towards Jihlava, alone in an overstuffed car.

On the way, we found out that we have a lot in common – we were more or less the same age, both of us had returned to the accordion after a thirty-year pause, both of us tried to make music with our friends, we both used to work for the same company once, both our accordions were white and our daughters were called the same name. Too many coincidences! We arrived at Chaloupky as the last, but we were sure to meet and play some other time as well. 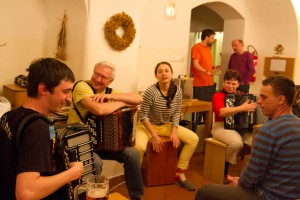 The workshop itself was organised professionally: short introduction on the first evening, and long talks about life and music into the night; Musette and “Andělové z nebe” by Radůza in the morning to wake us up a bit.

——
After that we divided ourselves into groups to consult the six instructors  (Jindra Kelíšek, Michal Karban, Stanislav Samuel Raška, Tomáš Görtler, Žaneta Vítová) and into groups for „band“ workshops after the lunch.

It’s perfect that everybody can choose the style closest to them, according to their interests and capacities. The experienced musicians explain us patiently gimmicks and tricks of group play and we practise, practise and practise.

Each group has its excellent showmen as well as the timid and inexperienced. Each group chooses two pieces and each player is assigned a role depending on their courage. The nervousness leaves us. In the afternoon, we are already surprised how well it sounds.

The afternoon programme continued with a series of interesting lectures on public performances, on musicians’ tactics, on the incompatibility of alcohol and accordion, on the accordion as a musical instrument with a complex construction that reflects the experience of many generations and on its maintenance – Dalibor shocked us with an example of what NOT to do with an accordion in the style of stars from the seventies. Of course, using an old and useless one. 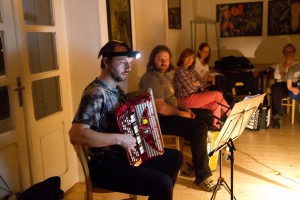 The main item on the evenings’ agenda was an anti-performance in candlelight, where each of us played other a piece of his or her own choosing. The instructors didn’t have to, as they were already tired from working and stretching their patience, and therefore deserved to be entertained. After more than two hours, the programme continued in the company of our friend the Beer Keg and an endless string of anecdotes.

A short, intensive sleep, a breakfast, and it’s here: a perfect Sunday! Chaloupky covered in snow and practising and perfecting pieces for the megaconcert. Stage-fright, as if we were to perform with the Wiener Philharmoniker. It starts after lunch. All groups and their instructors compare their abilities, having chosen distinctive and fitting names (what if the TV had come?).

And Musette in the very end, with Jindra in the role of a conductor. Who else? The conductor of the whole event, there’s no one better! Hey, is it really over? How’s that possible? Why had it been so short? went through our heads.

Cleaning up, packing, farewell and departure – it’s all much easier, the huge sacks of accordionist’s fears had been left behind in the separated waste. When we come home, we are full of energy, we want to play and throw our TVs and players away. 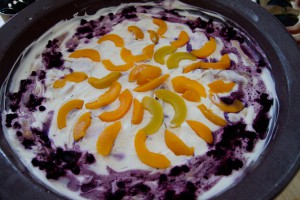 Do you think that there’s something missing? Not at all. I have saved the breaks between playing for later intentionally. They were characterised by godless gluttony in the style of ancient Romans in the era of decline of the imperium. Cook Jára outdid himself, and therefore deserves a ultra-praise.

What to say in conclusion? The media hadn’t come, but it didn’t matter. A great bunch of people met in one place and spent great times together with music and their beloved instruments. Only on the way home we realised that there’s no TV at Chaloupky – and that nobody had missed it. 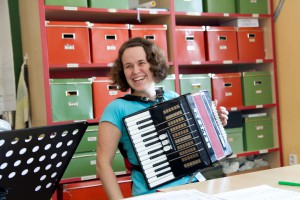 We were together, and thanks to music, close enough to our companions to understand each other – despite todays’ quick pace of life that draws people apart.

At a time that makes people look only after themselves, we were convinced that we can do a lot together. At a time when everybody has their own headphones and you can die in the street without anybody noticing it, we listened to each other. At a time marked by egoism, our excellent instructors shared their experience with us and were glad for even the smallest progress. It’s said that music draws people together – and all who were at Chaloupky believe that. Have a look at the photos, Jiřinka the paparazzi had been everywhere and patiently ran around all the workshops, where the programme for the last day was being prepared in utmost secrecy.

Thanks everybody, and see you at the summer accordionists’ workshop, which will take place on 28-30 August 2015! 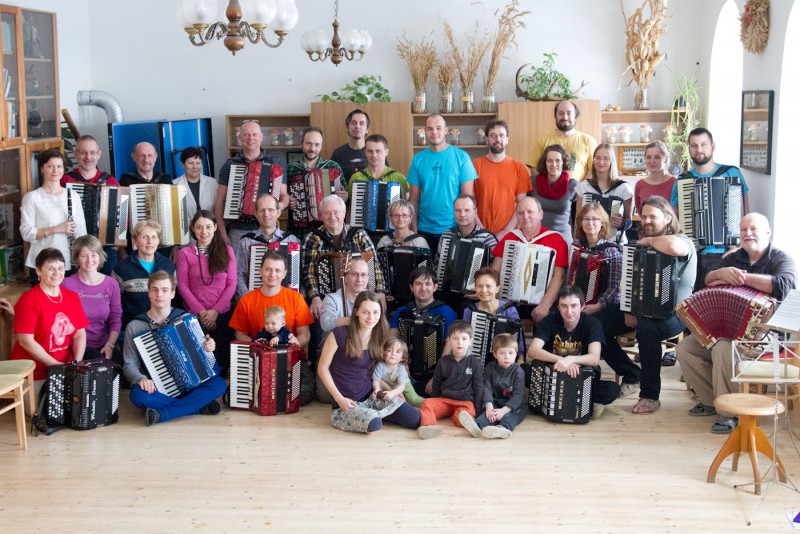